If you have not yet the read the part 1 of this article, please read that first, and then continue here.

As I explained in the first part, some very powerful forces are reshaping IP law practice globally. Unprecedented opportunities and market gaps are arising, which present Indian IP lawyers with tremendous opportunities.

We have discussed how trends like the rise of OTT platforms, explosion of video clip based social media and copyright infringement on those platforms, rapid post-pandemic digitalization of businesses and rise of direct-to-consumer or D2C brands have been gamechanger for IP law practice, and how it has opened up new horizons and deep markets.

However, there are several other trends that go even further that I will explain today. As you read this, I invite you to imagine how these market forces will play out in the years to come and how they are already disrupting the practice of law that we have known so far.

Explosion of Gaming and Fantasy Sports

The size of the gaming industry is much bigger than movies and music put together. As per a report released in May 2020 by senior market analyst Tom Wijman, the global gaming market will generate $159.3 billion in revenue in 2020. By comparison, the global movie industry made US$41.7 billion while global music revenues are only at US$19.1 billion in 2018.

In 2020, movie and music industries have been badly hit by closure of theatres and live musical events while gaming has flourished.

Still, most people are shocked to realise how much bigger an industry gaming is when compared to movies or music. But this is a reality, and it is here to stay.

There are 2.7 billion gamers in the world, out of which 2.6 billion play on mobile devices while almost 100 million play from high end consoles.

This huge cash rich industry relies not only on creative content, but also has champions and heroes like the sports industry, and is the dream of IP lawyers in terms of copyright, trademark, merchandising, franchising, brand extensions and even patent related work.

Gaming should have become one of the most important segments for the largest IP law firms, but still due to cultural reasons it does not yet get the same respect or importance as traditional movie and music industries. This is a cardinal mistake.

Practicing law in the gaming industry can be quite fulfilling as you have to be very innovative, as you are always using the archaic laws that were not made for gaming industry but for movies and music industry primarily, to protect the new and innovative ideas coming out from exciting startups.

New IP lawyers would do well to cultivate startup gaming companies as future clients and many lawyers can build their careers focusing on the gaming industry. Compared to older creative industries, this is blue ocean territory and there is land grab happening right now.

As it becomes progressively cheaper and easier to create a game or a gaming app, more and more companies are entering the fray all over the world. Because of that, there is a growing client base that has been for the most part unrepresented. Large media or IP law firms bill at rates that are unaffordable to most of these new studios, which represents a unique opportunity for younger lawyers, who may also have intuitive understanding and affinity to the industry.

What kind of legal work is generated by the gaming industry?

Fantasy Sports is another unmistakeable and phenomenal opportunity. The Indian fantasy sports market has shown tremendous growth. Gross revenues of online fantasy sports operators stood at ₹2,400 crore in FY20 compared to ₹920 crore in FY19, up almost three times year-on-year, according to the FIFS-KPMG 2020 report. It should be a telling fact that this year’s IPL was sponsored by a fantasy sports company. We can expect a rise in fantasy sports companies over the next few years, as they build new audiences and attract investments.

Legal work in fantasy sports is quite similar to gaming and is IP law heavy.

Rise of social media like Instagram, YouTube, Tiktok and Twitter have brought with them the rise of influencers. Influencers have launched billion dollar businesses on the back of their social media following, while some of them are earning millions or hundreds of thousands of dollars from endorsing established brands and launching their own products.

The global influencer marketing platform market size is expected to grow from USD 5.5 billion in 2019 to USD 22.3 billion by 2024, at a Compound Annual Growth Rate (CAGR) of 32.4% during the forecast period. In the USA, there are many publicly listed influencer marketing marketplace companies catering to this segment while in India this is still nascent.

Imagine all the legal work that is involved in brand endorsement deals, licensing deals and the rest.

Influencers are often also content creators. Their followership usually grows based on the unique and well liked content they produce and share. And copying is a common peeve!

The global Licensed Merchandise market size was USD 304 billion in 2019 and it is expected to reach USD 424 billion by the end of 2026, with a CAGR of 4.8% during 2021-2026 as per Marketwatch. Merchandising has been around for a while, but what is new now is how broad based it is becoming.

Films, sports teams and popular music bands have made money from merchandising for decades now. However, there are many many contenders now – with a cult-like following of video games, TV series, online influencers, authors, bloggers, podcasters, religious gurus, politicians, and even some well-loved products, merch has become a part of how generation Z asserts its identity.

This has led to steady growth in merchandising revenues. Very often, a movie makes more from merchandising than it makes from box office!

Very close to merch deals, also comes franchisee deals which can work quite in the same way. Brand extensions are another type of deals where an existing brand known for a certain product, lends its name in unrelated industries. For instance, Lamborghini, a famed car maker, allowing someone to launch a Lamborghini deodorant or a Lamborghini coffee shop! Fans of the brand may often flock to that coffee shop or pick up that deo because they are in awe of the car!

And of course, merchandising, franchising or brand extension mean registering trademarks, licensing deals, opening of franchise stores, monetizing the name and likeness of a character or stopping unauthorised entities from making money from the name, brand or images! This industry is very IP law heavy. There is very little work other than prospecting partners, negotiating contracts and enforcing your IP.

Fake reviews – positive and negative. This is a huge issue for businesses – from small local restaurants to large platforms like Amazon.

If you are a successful hotel, all it takes for your competitors to do is to pay a few people to write terrible reviews to bring down your reputation and therefore your business. Similarly, your competitors may be using paid reviewers to get fake positive reviews.

There may be greedy or dishonest customers who hold you to ransom by threatening to post lies about your business on social media – this is in fact quite a common phenomenon.

How do you fight such damaging actions to your brand?

Enter: the IP lawyer. Usually using a mix of copyrights, trademark and defamation law, they manage to get defamatory content or unfair criticism removed.

Here is an example. Sometimes very unflattering videos of actresses and celebrities are uploaded on social media, many of which are even fake or doctored. How can these be promptly taken down? It is possible to pursue an action under laws related to indecent content perhaps, but it is much faster when you raise a copyright, image rights or trademark claim with social media platforms as we can argue that these platforms are economically benefiting from such infringing content.

Apart from IP claims, lawyers can sue review platforms for defamation and unfair practices. This is a very fast growing market given online disparagement of brands is growing very fast as well.

Patent filing has been steadily going up as investment in emerging technology has reached never seen before heights. Not only large businesses but governments have thrown their weight behind rapid research and development activities.

Comparatively, only 2,013 patents were filed in India in 2018! In India, 67.5% patent applications are filed by foreign inventors, while the rest is domestic.

Patent filing has rapidly increased since 2018 on the back of emerging technologies, especially emerging technology like 5G and Internet of Things, AI and machine learning, biotech, pharma and healthcare, 3D printing, synthetic food etc and massive investment in R&D.

There are few things to note about patent law related work:

There is definitely tremendous global opportunity for Indian IP lawyers in the global patent law services market while domestic opportunities are lackluster at best.

How can I tap into some of these opportunities as an Indian IP lawyer or law student?

Surely, after reading about all these mouthwatering, momentous opportunities, you are probably wondering how you are going to be able to tap into some of these.

Also, Join us for free & online 3-day bootcamp on “𝗛𝗼𝘄 𝘁𝗼 𝗸𝗶𝗰𝗸𝘀𝘁𝗮𝗿𝘁 𝘆𝗼𝘂𝗿 𝗶𝗻𝘁𝗲𝗿𝗻𝗮𝘁𝗶𝗼𝗻𝗮𝗹 𝗽𝗿𝗮𝗰𝘁𝗶𝗰𝗲 𝗶𝗻 𝗜𝗣 𝗹𝗮𝘄𝘀?” from 20th to 22th November, between 6-9 pm and learn how to tap into lucrative international IP law work that you will not want to miss. [CLICK HERE]

You will also get access to some other amazing resources through the group as well. 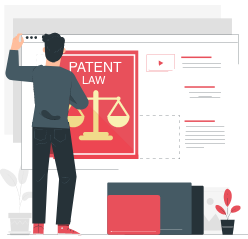 If you want to get latest IP related career insights like this, join our IP Career community (exclusive whatsapp group)

This article is a part of a 10 article series related to unique career opportunities and trends in IP law.

Do you want us to send you the remaining 9 articles in your email? Share your email here.

Are you interested in a career in IP law?

Would you like to join our exclusive IP career community?

Submit your phone number, and we will add you to the whatsapp group.

Thnak you for showing interest.

Students of Lawsikho courses regularly produce writing assignments and work on practical exercises as a part of their coursework and develop themselves in real-life practical skills.

LawSikho has created a telegram group for exchanging legal knowledge, referrals, and various opportunities. You can click on this link and join:

Hey! The WhatsApp group is full and I am not able to join, kindly help me out! Thank you.

I am really thankful to the owner of this website who has shared this wonderful article at here.